WHAT IS FAMILY CONSTELLATIONS
Family & Systems Constellations with Amanda Gifford.

The constellation process uses images and the body experience rather than words or narrative. The first image that presents at the beginning of a client’s process is that of their internal picture of their current family system. From this image the facilitator can offer a working hypothesis of the family dynamic. This is confirmed or added to by the feedback from the representatives.

“Absolutely intense experience. So many wounded individuals in the world carrying the sins of our mothers and fathers and working through the layers of those who came before us, those we have chosen to experience in this now. This constellation was such an expansion of the self. It was the first time I felt the collective of human hurts and misunderstandings personally. We truly are not alone. The threads that connect us are strong. I had a moment to reflect on the relationships I have with my family and not take things so personally. sometimes, it really is not about me and it truly is a good thing. Thank you Amanda.” Mpho July 15th 2017

Can claim on some Medical Aids.

The constellation process uses images and the body experience rather than words or narrative. The first image that presents at the beginning of a client’s process is that of their internal picture of their current family system. From this image the facilitator can offer a working hypothesis of the family dynamic. This is confirmed or added to by the feedback from the representatives.

Family Constellations, also known as Systemic Constellations and Systemic Family Constellations, is an alternative therapeutic method which draws on elements of family systems therapy, existential phenomenology and Zulu attitudes to family.[1] In a single session, a Family Constellation attempts to reveal a supposedly unrecognized systemic dynamic that spans multiple generations in a given family and to resolve the deleterious effects of that dynamic by encouraging the subject to encounter representatives of the past and accept the factual reality of the past.

Family Constellations diverges significantly from conventional forms of cognitive, behaviour and psychodynamic psychotherapy. The method has been described by physicists as quantum quackery, and its founder Bert Hellinger incorporates the pseudoscientific idea of morphic resonance into his explanation of it. Positive outcomes from the therapy have been attributed to conventional explanations such as suggestion and empathy.[2][3][4]

Practitioners claim that present-day problems and difficulties may be influenced by traumas suffered in previous generations of the family, even if those affected now are unaware of the original event in the past. Hellinger referred to the relation between present and past problems that are not caused by direct personal experience as Systemic entanglements, said to occur when unresolved trauma has afflicted a family through an event such as murder, suicide, death of a mother in childbirth, early death of a parent or sibling, war, natural disaster, emigration, or abuse.[5] The psychiatrist Iván Böszörményi-Nagy referred to this phenomenon as Invisible Loyalties.[6]

The philosophical orientation of Family Constellations were derived through an integration of existential phenomenology family systems therapy and elements of indigenous spiritual mysticism.

The phenomenological lineage can be traced through philosophers Franz Brentano, Edmund Husserl and Martin Heidegger. This perspective stands in contrast to the positivist reductionist orientation of the scientific psychology. Rather than understanding mind, emotion and consciousness in terms of its constituent parts, existential phenomenology opens perception to the full panorama of human experience and seeks to grasp a sense of meaning.[7]

Family Constellations take their form from family systems psychology. Leading figures in this movement whose influence can be recognized include Jacob Moreno, the founder of psychodrama; Iván Böszörményi-Nagy, the pioneer of transgenerational systemic thinking; Milton Erickson, a pioneer of brief therapy and hypnotherapy; Eric Berne who conceived the concept of life scripts; and Virginia Satir, who developed family sculpture, the precursor of Systemic Constellations.[7] In the past decade, further advancements in the use of the process have been innovated by practitioners throughout the world.

The process draws from indigenous spiritual mysticism to contribute towards releasing tensions, lightening emotional burdens, and resolving real-world problems. Hellinger lived as a Roman Catholic priest in South Africa for 16 years in the 1950s and 1960s. During these years, he became fluent in the Zulu language, participated in Zulu rituals, and gained an appreciation for the Zulu worldview.[7]

Of particular importance is the difference between traditional Zulu attitudes toward parents and ancestors and those typically held by Europeans. Heidegger postulated that to be human is to find oneself thrown into a world with no clear logical, ontological, or moral structure.[8] In Zulu culture, Hellinger found a certitude and equanimity that were the hallmarks of Heidegger’s elusive authentic Self. The traditional Zulu people lived and acted in a religious world in which the ancestors were the central focal point. The ancestors were regarded as positive, constructive, and creative presences.[9]The connection with ancestors is a central feature of the Constellation process.

The term “Family Constellations” was first used by Alfred Adler in a somewhat different context to refer to the phenomenon that each individual belongs to and is bonded in relationship to other members of his or her family system.
The method 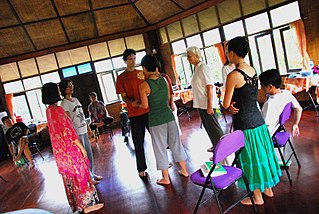 Letting the system move to a flow of love through insight and the multifaceted weave of consciousness. Every persons wisdom in the Constellating adds to the healing and wellbeing.

As the constellation progresses, the hidden dynamics of the system are revealed. Slowly the process moves toward a resolution where the inner image is one where each member of the family has found a good place in the system. This is measured by the bodily ease and comfort that each representative feels. The resolving image is a new inner reality that the client can take with them into their outer world (Hellinger 1998).

Integrating New or Lost or Emerging Aspects of Self

Interview with Amanda Gifford on Family Constellations 2017 on Eden Radio.

Amanda Gifford from GeniusLab South Africa, William Brown from Resonance Foundation Hawaii and Jaime Leal-Anya from Super Consciousness Magazine Yelm, WA USA share a mindmeld about epigenetics, thoughts, frequency, focus, health, sound, observer effect and experiential methodologies for health and wellbeing of the system like Drama Therapy and Family & Systems Constellations work that Amanda has been doing in South Africa and much more. Listen to this conversation if you are interested in the research in the study of applied mind, health, DNA, epigenetics, thought, frequency, consciousness and mastering your experience of reality by learning to resonate the frequency you wish to experience. William Brown is a biophysicist and research scientist at the Resonance Project Foundation (http://resonance.is/) and Hawai’i Insitute for Unified Physics (http://hiup.org), where he performs experimentation and theoretical work to better understand the physics of complex systems. He explores all systems of knowledge, from physics and biology to ontology and the nature of consciousness. Although his exploration of understanding is all inclusive, William’s professional background is in cellular and molecular biology. He has worked in numerous laboratory facilities across the United States and has extensive experience in molecular biology research.

This below is an interview with Amanda Gifford on Family Constellations by SuperConsciousness Magazine in Yelm Feb 7th 2013.

WHAT IS A FAMILY CONSTELLATION?
Family and Systems Constellations is a therapeutic method developed by Bert Hellinger, German psychotherapist, author and teacher. Although Hellinger’s work transformed considerably in recent years, his early work is known today as “Classical Constellations”, which deals with the trans-generational dynamics of family systems.

Hellinger worked as a missionary in Natal for 16 years, and is currently in his 80’s. In his early work, Hellinger uncovered what he has called the “Orders of Love”, (natural laws, which assist the flow of love within a family system).

Using family constellations, the problematic dynamics that operate in families can become visible and can be experienced by the client from a meta-position or in an embodied way that brings new insights and perspectives.

When the person is “entangled” in their system, they may experience a range of physical, emotional and mental difficulties and struggle to engage with life and their current context in their full strength. With the constellation, patterns that run over many generations can be revealed, and resources that strengthen the person become evident within the wider family system. During the family constellation, the body, mind and heart of the person can be engaged so that the healing is not merely an intellectual insight, but an experience that can draw on various sources for resources and solutions.

Families and individuals can address issues such as marriage and relationship difficulties, physical and mental illness, addiction, adoption, grief, employment and finances. Organizations can use this process for coaching team members or to focus on restructuring, communication, decision-making, and strategic issues. Constellations may also reveal a new perspective on issues related to inheritance, family businesses, war, crimes and race. Constellations have also been applied to community settings, reconciliation, and environmental and political themes.

In a constellation people representing family members or elements of any system are placed in relationship to each other, making a 3D image of the system available to the facilitator. From this set up, the facilitator and client can develop potential solutions to provide effective intervention in the system. Those who have facilitated the work, as well as those who have experienced it, find both the effect and the process difficult to explain. The outcome of the work is: a greater ability for love to flow between family members, regardless of the family “story”. In the case of Organizations, a greater flow of acknowledgment, productivity and/or profit is observed.

Systemic and Family Constellations can also be done in individual counseling and coaching settings using genograms, floor markers or figurines.

Family and Systems Constellations is not always gentle approach, and can instigate larger healing shifts that can make the symptom or client feel worse in some cases before getting better. It is not a substitute for long term therapy and it is not recommended to attend group workshops when suffering from a depressive episode, psychosis or post traumatic stress. Individual Constellations are a better choice if the client is already feeling overwhelmed or vulnerable.